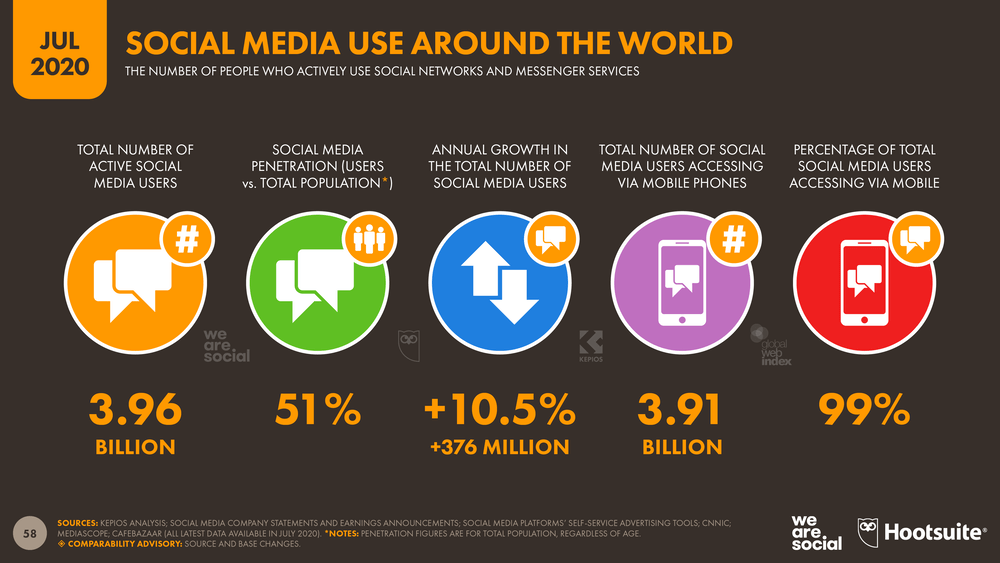 Social Media is the beating heart of Internet Users! This statement cannot be denied. Our world revolves around Facebook and Instagram from the moment we wake up until we go to bed at night. Do you know these amazing facts? You probably don’t! What are you waiting to find out? This article will provide all the statistics and facts about social media.

Recent research has shown that more than 55% of people use the internet. This is the Crazy we are referring to! Nearly all platforms offer digital marketing and online shopping. A lot of people make money using them. This has certainly opened up uncountable business and job opportunities.

3.5 million images and more than 720,000 hours of videos areare shared on social media every day. Social Media is used by 51% of people worldwide and only 3 months per year. Crazy Enough?

You’ve never read the facts. They are all divided by their platforms. Take a look at them. Let’s go.

The information in the following points was compiled from different data analysis sources. Curious?

Statistics on the Most Popular Social Media Platforms datareportal.com reports that 55% of the global population uses social media. These social media facts will shock you, we assure you.

The Monthly Active Users of the Most Popular Social Media Platforms-

Google was looking to sell the search engine to Yahoo in 1997 for $2 million. That didn’t happen.

Fun Social Media Facts: Nearly 7.2% of traffic comes from searching for the term Google ” on Google. Weirdos! I hope you’re not one of them. Fingers crossed.

These are the facts about social Media for Facebook.

It was difficult to gather all the statistics and facts from social media. You need to search for leads and verify them. All of these statements are true, I can assure you. You can reach us at the email address or leave a comment below if you have any questions. We are more than happy to help you. Ciao!

What are some interesting facts about social media?

One in five people has bought online within the past 30 days.

Google was unavailable for only 5 minutes in August 2013, which reduced global internet usage by 40%. That’s Huge!

What per cent of the world uses social media?

Social Media is used by 55% of the world’s population.