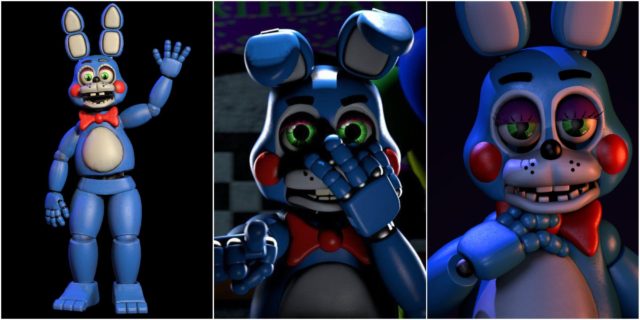 Toy Bonnie is the antagonistic animatronics in Five Nights at Freddy’s 2. He is the “toy” version of Bonnie from the original game. His style and attacks are very similar to the original bunny. Read some amazing Toy Bonnie facts here!

Toy Bonnie is more modern than his older counterpart. He has more details on his face and a hard plastic shell than fur. Toy Bonnie is featured in several games as either an antagonist or as a Minifigure that the players can collect.

10 All New and Improved

Toy Bonnie is the “new, improved” Bonnie. He’s a brighter blue than Bonnie and looks much more modernized. According to some, he has undergone the most dramatic overhauled animatronics. His bright green eyes have bold eyelashes, and his cheeks are covered in whisker spots. Bonnie looked a lot like Freddy, so Toy Bonnie looked utterly different.

Although gender is not an essential part of this game, there are still a lot of debates over whether Bonnie is a boy/girl. Bonnie’s name was confusing to many fans. Toy Bonnie added confusion with his eyelashes, which are almost “face full of makeup,” and made it even more confusing for some.

Scott Cawthon (the game creator) had repeatedly stated that he intended Bonnie and Toy Bonnie to be male when he created them.

Toy Bonnie leaps at players after being seen in the vents. Players must wear the Freddy Fazebear mask and fool Toy Bonnie into fearing him.

Also, read What Was The First Anime Ever Made?

Toy Bonnie is the guitarist in the band and can be found with his guitar at Freddy’s Show Room of Five Nights. His guitar is the same as Bonnie’s but brighter colors. Toy Bonnie can be seen off-stage with his guitar in Party Room 3. The guitar doesn’t go with him once he leaves the room, and it is not clear what happens to it.

6 The size of the pupils gets smaller
Five Nights at Freddys Toy Bonnie eyes
Although it is not known why, Toy Bonnie’s pupils and iris, especially his pupils, shrink as he approaches the player. This is a unique phenomenon that no other animatronics can replicate. It may also be due to some supernatural reason.

His eyes are like animals’. But, when the light shines on them, they stay the same. His eyes are visible in Party Room 4 close-up. They shrink further once he’s in the office.

Toy Bonnie seems to be quite selfish. At Freddy’s AR Special Delivery, Toy Bonnie shows his personality at Five Nights. He has voice lines for the very first time. Toy Bonnie says that he feels like he’s the star of the show and is more famous than his player character. His dialogue seems to reveal that he is primarily concerned about fame.

The second line in Five Nights at Freddy’s: Special Delivery shows how Toy Bonnie is not very good at counting. He will not count in the correct order when the line is presented. This may be due to his childish voice.

Many theories suggest that Toy Bonnie may have the spirit and personality of a child. This is because of his boastful nature, high ego, and high-pitched voice.

3 Bonnie Only Has Eyebrows

Although Toy Bonnie is not the only character to have eyebrows in Five Nights at Freddy’s, he is the superior Bonnie to have them. His brightly colored, shiny blue plastic stands out against his thicker, darker eyebrows. He has a lot more emotional range because of them. Many players know that he isn’t aggressive but almost seems excited when he does jumpscare animation. Toy Bonnie has eyebrows that aren’t like any other Bonnie. It might be an extra feature in his makeup.

Toy Bonnie was one of the last animatronics that got a voice actor. He was supposed to voice him in Five Nights at Freddy’s Ultimate Custome Night, but he didn’t speak at all the time.

His voice lines are believed to have been scrapped. This makes him the only animatronic toy not to have a voice. Toy Bonnie is the brazen child voice in Five Nights at Freddy’s AR Special Delivery. However, unlike Freddy, his voice actor remains unlisted.

Bonnie and Toy Bonnie were the only counterparts to each other during Five Nights at Freddy’s 2. This is quite strange, considering the two have the most distinct appearances compared to their original toys.

Perhaps there’s a reason Bonnie and Toy Bonnie are kept apart. Maybe there’s a deeper meaning to the two companions.