Is Fly On The Wall Snapchat Fake Or Real?

How to Measure the Effectiveness of an HR Department

Interesting Facts About the NFL and the Super Bowl

A web application is not just a web page, the essence lies in its dynamics. In order to create a high-quality development, you need to know certain secrets and features of the development process. Continue reading this article to learn more about web application development.

What is a Web Application?

Let’s begin with the structure of web applications. It consists of two main components: the front end and the back end.

The front end is HTML+CSS and JS code that runs entirely in the browser or client. And the backend running on the server usually includes PHP, Python, Java, node.js, or some other programming language and a database like MySQL.

Some modern applications may not have a back-end, such as using only web or rest services to update or query information, or the information is simply stored locally.

Interface refers to the entire visual part, screens, visual effects, and all designs that people interact with.

To create an interface, you must be familiar with HTML, CSS, and JS. A fundamental requirement is to have a text editor specialized in web development. You can also use frameworks or libraries to make it easier to create html+css and js code, among the most commonly used are.

Also, read WEBSITE PAGE FACTS | EVERY PAGE SHOULD HAVE ONE CALL-TO-ACTION ABOVE PAGE’S FOLD

Usually, there is a lot of application logic deciding how to store the data, query it and process it.

The most common programming languages ​​are PHP, Python, Java, and Node.js, but a framework is commonly used to speed up the process, some of the more common frameworks are:

For PHP: Symfony or Laravel.

For Node.js: Express.js or Meteor.

There are also other options based on node.js such as Angular which is developed by Google and is gaining momentum.

They are a collection of commonly used functions, subroutines, and/or classes that can be added and reused across development projects. When we develop an application, we can use different libraries.

Frameworks are a set of libraries and tools that act as the skeleton or backbone of an application and can significantly reduce development time. As a general rule, they cannot or should not be combined. For example, if we use bootstrap as our HTML-CSS framework, we cannot use another in the same project. That is, no one mixes Laravel and Symfony in the same project (both are PHP-based application development frameworks).

However, it is possible and common to use a framework and at the same time add other libraries for certain tasks outside the framework. 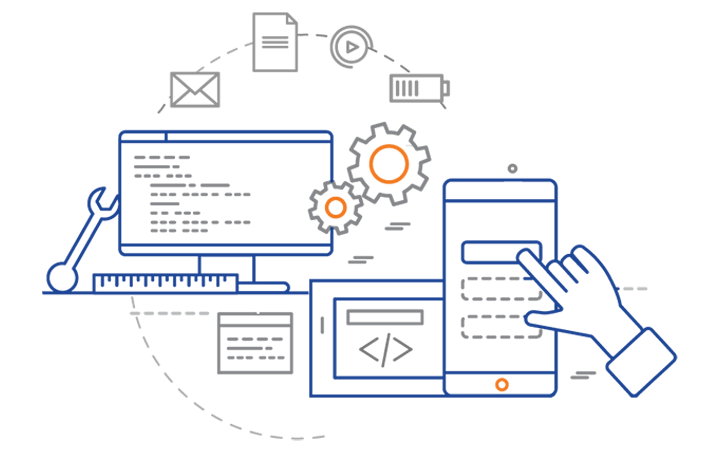 When working on large projects, it is important to define development standards, such as how variables, functions, etc. are named, file structure, comments, and so on.

Brief description of the development process

There is no set rule for what the process of developing a web application should be. But there is a certain list of actions that are useful to follow.

Define a roadmap: This is where you define the functionality or features your app will have and possible release dates. Initially, it is better to run the basic version and enrich it more and more over time.

Choose Programming Languages, Frameworks, and Libraries: Depending on the program you want to develop, you should evaluate and choose a programming language and then a framework that will allow you to achieve your goals.

Prototyping. A prototype allows you to test and refine your ideas without spending too much programming effort. The point is to develop a very simple version, without databases, checks, etc., that will allow other people to understand and test the application.

Design or Art Development: Now that you’ve fine-tuned your prototype, it’s time to make it beautiful, for this you’ll need a graphic designer to design your screens: colors, fonts, sizes, images, etc.

Program Development and Unit Tests: This is the longest step, doing all the programming of the application, but if the previous steps were done well, this one will be easier.

Tests and corrections: Each of us can make a mistake. Therefore, you need to test the result of the work.

Maintenance: This is where new required features are added and are on the roadmap as pending, and some bugs that were not discovered during the testing phase are fixed.

Now you know everything about creating web applications. To facilitate the implementation of such applications, you can refer to https://devoxsoftware.com/services/web-app-development-services/.

Is Fly On The Wall Snapchat Fake Or Real?

How to Measure the Effectiveness of an HR Department

Interesting Facts About the NFL and the Super Bowl